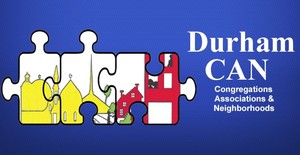 ERUUF was well represented at the recent Durham Can Leaders Retreat held on 2/7/2017 held at Monument of Faith Church.  Over 100 people attended the retreat, 6 of them from ERUUF.  Amassa Fauntleroy shares this report:

The session consisted of three segments. First the strategy team summarized the analysis, done by the national office of Metro IAF, of the recent presidential election and the lessons it may have for CAN actions going forward. The basic documents are attached and make for interesting reading. There was a discussion of having a capital campaign to raise significant funds so that CAN has ‘skin in the game’ relative to projects it is pushing- for example affordable housing.

The second part of the meeting consisted of small group discussions about the material presented above and also asked for suggested additional actions that CAN might want to consider for the coming year. There were also discussions of possible allies to be cultivated for the work ahead. These included governmental groups as well as some private businesses.

The final segment consisted of the reporting out of the discussions held by the small groups. It was felt that over all the content and conclusions of the analysis presented were accurate. However, most of the seven small groups commented that racism was not emphasized enough in the analysis done in the two documents presented. The actions suggested that were different from CAN’s current initiatives were mostly related to Trump’s agenda and how to effectively resist; e.g. immigrant and refugee issues, support for the LGBTQ community, Muslim citizens and recommitting to the working class.

Any ERUUFian is welcome to attend CAN events. It's a great way to learn about local community organizing and make a difference in the quality of lives in Durham.  Visit our Durham CAN page to learn more.

Attention: we notice that you are using an older browser. We no longer support this version of your browser. Please install one of the supported browsers listed below

Continuing may result in unexpected behavior